I presented a series of case studies on game developers’ interventions to reduce abuse/trashtalk/player harassment in online games on Tuesday. This was one of them. (Warning: This post contains no pictures of actual kittens.)

Peruse ArenaNet’s Guild Wars 2 forums at length and you’ll see a peculiar phenomenon. There’s no swearing. There’s very little bad language, period, and I’ve never seen anyone actively try to get around the word filter. I had  never seen a gaming forum with so little profanity before.

Sure, players have to agree to a lengthy Code of Conduct, but that’s the case everywhere online these days.  (And I’ll be coming back to some of the major issues raised by the contents of said Code of Conduct in a later post.)

But here’s what it looks like when you try to swear:

There’s some adaptation of traditional phrases.

But still, it all sounds like kittens. This is an incredibly effective tactic, as far as I can tell - player reactions have been positive. 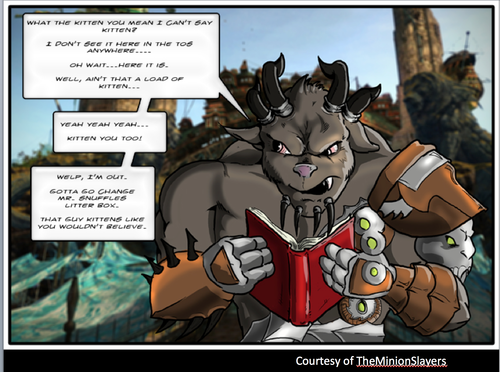 Part of what is so effective about this system is that it allows the underlying text to still be readable. With most forum filters, you get a series of stars - ***** -  that don’t necessarily correspond to the length of the word, which makes it difficult to understand what the poster was trying to say. Players end up frustrated by the lack of ability to communicate clearly but with the force they intended - profanity is closely tied to their emotions of whatever they’re posting about. So, when a player says “coincidence is a kitten,” I can still get the intended meaning (and the force is undiminished), it’s just much cuter.

Additionally, the kitten filter allows players to step back from the heated argument and intensity of the game forums. Forum posters care deeply about the issues that they’re talking about, and discussions can go from abstract to personal and insulting very fast. The humor of being called a “kittening motherkittener” by whoever is arguing with you about thief builds brings a sense of detachment from the insult, which seems to generally improve the quality of discussion on the forums. The comic below sums it up nicely. 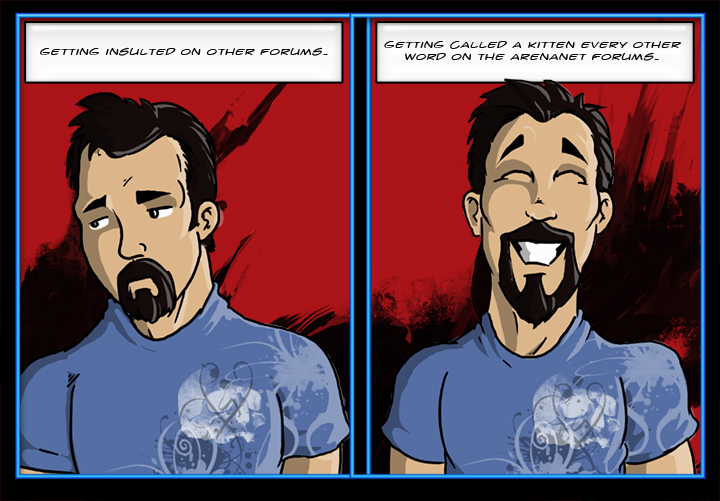 Although I don’t have any problems with seeing profanity online, I can understand ArenaNet’s decision to keep their forums “family friendly.” I’m sure ArenaNet was not the first to substitute in other words - but this is one of the most effective profanity filters that I’ve ever experienced. The only way to make it better would be an option to disable the kittens - for those who don’t like cute, of course.